What could Airsource Partners do to make aviation expertise more accessible to all?

We have conceived the first aviation –related online expert knowledge service connecting actors of the air transport industry with the outside expert world. 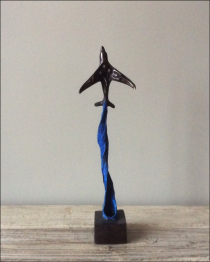 Authentic and caving in to no concession, Sidiki Dermé makes of his African roots his richness and his sources of inspiration.

Sidiki Dermé is recognized as one of the greatest African artists of his time. In Western Africa several of his works have been acclaimed by critics. His sculptures revealing feminine and masculine plastics, maternity, esotericism and eroticism, equestrian arts and aerial movement won him recognition and wide praise in France and beyond.

Running an airline, airport or any other business efficiently should not prevent us from enjoying other, more intangible, expressions of man's soul and human freedom.

Airsource Partners is proud to actively promote the work and message of bronze sculptor SIDIKI DERME of Burkina Faso.

Heir of the bronze smelters tradition of Ouagadougou and coming from a family at the origin of the work of bronze in Mossis country, he grew up in the family court in the district of Nioxin amid horses and sheep.

All naturally, Sidiki has been initiated since his childhood to the traditional art of bronze casting with lost-wax technique. He gradually acquired all the intricacies of that expression of art, from modelling to moulding, from oven baking to the casting of bronze, a cast copper-tin alloy.

Over time Sidiki became a versatile artist relentlessly pushing the frontiers of his art. He evolves in a unique and dreamlike world of his own shaped by his African and international roots.

Sidiki Dermé is recognized as one of the greatest African artists of his time.

In Western Africa several of his works have been acclaimed by critics :

At Airsource Partners' request, Sidiki Dermé has agreed to cast a unique series of aviation-inspired sculptures where the artist shares with us his very personal vision coming from a wise man of Africa of an aircraft seen as a bridge between men and eternity.

All artworks proposed in the catalogues attached are unique (made under the lost-wax technique) and come with a certificate of authenticity signed by the artist.

Airsource Partners proudly promotes the artworks of Sidiki Dermé to the entire Aviation community and beyond.

Experts / companies available for this project